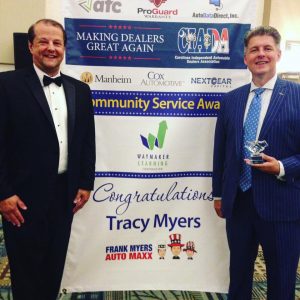 This years winner of the CIADA Community Service Award is an active dealer in all of the communities he serves. Tracy Myers, owner of Frank Myers Auto Maxx in Winston-Salem, NC, has been a leader a giver in the community, always giving back when he could and never asking for anything in return.

In 2011, many say he outdid himself when he had the vision to take his passion for sports entertainment (also known as pro wrestling) and use it to raise money to help provide toys and Bibles to less fortunate children during Christmas. He created the WrestleCade fundraising event which partnered with The Christmas Toy Drive to benefit The Salvation Army.

What began as a one time/one off fundraising event is now entering its sixth year and is one of the largest annual 3-day events of its kind in the world! Last year alone, an estimated 6,000 wrestling fans from as far away as Norway and Austria attended the event, and dramatically boosted the local economy with tourism dollars. When asked why he chose to partner with The Christmas Toy Drive to benefit The Salvation Army, Myers replied: “As a father, it was an easy decision for me. Last year alone, 6,506 children in the greater Winston-Salem area received 55,690 toys from the Salvation Army and the lives of more than 8,500 families were significantly impacted. To be a part of an organization that helps change so many lives at such a young age is special.”

This is just one of the many ways Tracy is involved and gives back to his church and his community.

The CIADA Community Service Award is sponsored by Waymaker Learning Corporation. CIADA Strived to encourage its members to be active in the communities they serve. An active community benefits when businesses give back, and our businesses benefit from a prosperous community.