Author’s Note: I originally wrote and published the following post as a tribute to my father in June of 2010. It was so well received that I have reposted it every Father’s Day weekend since then. Enjoy and “Happy Father’s Day!” – Tracy Myers 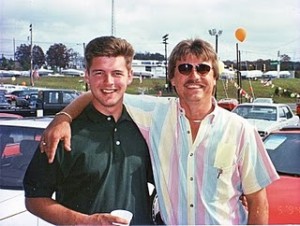 At least once a day, someone comes up to me and asks, “So…how’s your Uncle?” Of course, they’re not asking about my REAL Uncle. They’re asking about the man that I’ve been referring to as “Uncle Frank” on televison commercials over the past 15 years. That man is my father, Frank Myers.

For the record, my father is alive and well. He’s doing what he loves doing most; being an entrpreneur. I’ve truly never met anyone that liked the “thrill of conquering” a business model quite like my father does. He’ll come up with a concept for a new business, brings it to life and makes it successful more times than not. Then he gets bored and moves on to the next challenge.

For those of you that don’t know my “story”, I’d like to share it with you. Not because it’s that special but rather the misconceptions that revolve around it. Lots of folks assume that since my unofficial title is PHD (Pappa Had a Dealership), that I would have had an easy time getting into the used car business. Indeed, my father had big plans in store for me, only they meant working 60 hour weeks in the detail shop!

I was 15 years old when I first started working in my father’s detail shop. I went away to college and spent my free time as a salesperson at a local Toyota dealership. If my father had known I was working for another car dealership other than his own, he wouldn’t have been very happy to say the least. When I returned home years later, my father didn’t do me any favors and offered me a position in the detail shop.

I worked my way up the ladder through every aspect of the used motor vehicle industry. 5 years ago, at the age of 34, I bought the family car dealership and sold almost 1,400 vehicles in my first year.

Fast forward to 2011 and I still love this business as much as I did the day I sold my first car. Of course, it’s easy to be happy when the dealership has posted a 144% increase since 2008. It saddens me that lots of quality dealers that I consider friends and mentors were forced out of business due to the struggling economy. My dad is still my biggest supporter as well as my biggest critic. I find a lot of humor in the fact that he says he hates the internet, even though he uses it daily in all of his own businesses.

Regardless of our differences, there is one thing we can both agree on that took us way too long to realize. If we put God and family before the dealership, then the dealership will always prosper with a lot of hard work and prayer.

Happy Fathers Day to the best dad in the world and the best “car guy” that I’ve ever met…Uncle Frank!