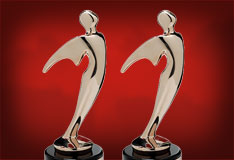 Nick Nanton, and J.W. Dicks of CelebrityFilms™ were recently honored to receive two Telly Awards for their fervent work as the Executive Producers of the documentary “Car Men”.

The documentary features two Winston-Salem business owners, Frank and Tracy Myers, detailing their touching and occasionally hilarious story of how the they created a car business known all across America for its successful out-of-the-box thinking. Tracy Myers is known for his off-kilter TV commercials, featuring such quirky characters as Uncle Frank and Chainsaw Charlie.

CelebrityFilms™ accepted awards in both the History/Biography and Public Relations categories.

The Emmy Award Winning pair Nick Nanton and Amardeep Kaleka teamed up to direct this film along with Bobby Davidowitz on Second Camera and Sound.

An Emmy Award Winning Director and Producer, Nick Nanton, Esq., is known as The Celebrity Lawyer and Agent to top Celebrity Experts.

The CEO of The Dicks + Nanton Celebrity Branding Agency, Nick is an award winning director, producer and songwriter who has worked on everything from large scale events to television shows with the likes of Bill Cosby, President George H.W. Bush, Brian Tracy, Michael Gerber and many more.

Nick is recognized as one of the top thought-leaders in the business world and has co-authored 15 best-selling books, including the breakthrough hit Celebrity Branding You!® and has co-authored books with Brian Tracy, Mari Smith, Jack Canfield, Dan Kennedy, Robert Allen, Leigh Steinberg and many other celebrity experts and Nick has led the marketing and PR campaigns that have driven more than 500 authors to Best-Seller status. Nick has been seen in USA Today, The Wall St. Journal, Newsweek, Inc. Magazine, The New York Times, Entrepreneur® Magazine, FastCompany.com. and has appeared on ABC, NBC, CBS, and FOX television affiliates around the country speaking on subjects ranging from branding, marketing and law, to American Idol.

Nick is a member of the Florida Bar, holds a JD from the University of Florida Levin College of Law, as well as a BSBA in Finance from the University of Florida’s Warrington College of Business. Nick is a voting member of The National Academy of Recording Arts & Sciences (NARAS, Home to The GRAMMYs), a member of The National Academy of Television Arts & Sciences (Home to the Emmy Awards) co-founder of the National Academy of Best-Selling Authors, an 8-time Telly Award winner, and spends his spare time working with Young Life and Downtown Credo Orlando and rooting for the Florida Gators with his wife Kristina and their three children, Brock, Bowen and Addison.

JW Dicks, Esq. is an attorney, best-selling author, entrepreneur and business advisor to top Celebrity Experts.  He has spent his entire 35-year career building successful businesses for himself and clients by creating business development and marketing campaigns that have produced sales of over a billion dollars in products and services.  His professional versatility gives him a unique insight into his clients’ businesses to see untapped opportunities to capitalize on, allowing him to use his knowledge of how to structure and position their business to take advantage of them.

The original Frank Myers Store was started more than 83 years ago by Frank Myers, the Great-Grandfather of the current owner Tracy Myers and the Grandfather of the previous owner, Franklin Myers. Tracy has spent the past 15+ years trying to change the landscape of the car business and the bruised reputation of car salespeople all over the country. Tracy was one of the first 100 Certified Master Dealers in the Nation, a NIADA Eagle Award Winner and was the youngest recipient ever to be honored with the highest available distinction in the used car industry…the National Quality Dealer award. Frank Myers Auto Maxx was recently recognized as one of the Top 22 Independent Automotive Retailers in the United States by Auto Dealer Monthly Magazine, one of the Top 10 Internet Auto Retailers in the Nation and one of the Top 3 dealerships to work for in the country by The Dealer Business Journal. Tracy is also the Co-Creator of the world famous “Everybody Rides” program and author of the best selling book “Uncle Frank Sez” available at Amazon.com and better bookstores. He is a Christian Business Owner whose goal is to run his business “By the Book”. The dealership specializes in helping people find, qualify for and own the vehicle of their dreams with little or no money down…even with less than perfect credit.

About “Car Men” – The Movie

He’s gone on TV dressed up as a giant pickle. Nowadays, you’ll see him most often sporting a giant red, white and blue Uncle Sam hat. Tracy Myers may play outrageous to sell cars – but this best-selling author, nationally-recognized entrepreneur, and devoted family man is dead serious when it comes to building a business he, his family and his city can be proud of.

“Car Men” details the touching and occasionally hilarious story of how the Myers men created a car business that’s known all across America for its successful out-of-the-box thinking – not to mention its off-kilter TV commercials, featuring such quirky characters as Uncle Frank and Chainsaw Charlie.

As one auto pro says, “In the car business, Tracy Myers is who everybody wants to be.” Watch “Car Men” and you’ll find out why.