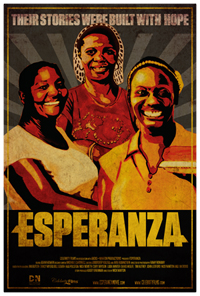 “Esperanza” earned the Emmy® Awards for best historical/cultural documentary. Myers received an Emmy Award for his role as an Executive Producer of the film. He also served as Producer of the film, “Mi Casa Hogar,” which earned Nick Nanton an Emmy for Best Director. The Emmy® Ceremony was held on November 24, 2013 in Miami, Florida.

“Esperanza” is the inspirational story of how the Great American Pastime of Baseball led a young ball player to his life’s mission. While playing winter ball in the Dominican Republic in 1985, Dave Valle, a Seattle Mariner’s catcher, was swarmed by young children as most young fans would do. Dave soon realized, however, that an autograph was the last thing they wanted; they wanted food. They were starving, and they weren’t the only ones. The ballpark was surrounded by poverty stricken villages. After that eye opening experience Dave and his wife Vicky made a pact to return and make a difference. It was in that moment, Esperanza was born.

The film showcases Esperanza International – an organization that dedicates itself to free children and their families from poverty through initiatives that generate income, education and health, restoring self-worth and dignity to those who have lost hope. It reveals an in-depth look at Esperanza International’s incredible story and what can happen when people believe in an idea and act to make it come true.

“Mi Casa Hogar” reveals an in-depth look at the incredible story of the Casa Hogar children’s home in Acapulco, specifically how the home is providing a nurturing environment with a focus on education in this economically disadvantaged region. Casa Hogar is a children’s home that provides care, shelter, strength, love and hope in a Christian environment for orphaned and abandoned children in Acapulco, Mexico.

Tracy was previously featured in the film “Car Men” which won 5 Telly Awards and was also nominated for an Emmy. Tracy is recognized as one of the top thought-leaders in the business world and has authored or co-authored 7 best-selling books alongside Brian Tracy (Author of Eat That Frog), Jack Canfield (Author of The Secret, Creator of the Chicken Soup for the Soul Series), Tom Hopkins (Author of How To Master The Art Of Selling) and many others, including the breakthrough #1 hit YOU Are The Brand, Stupid!. He was also featured in the Emmy nominated film “Car Men”, which won 5 Telly Awards, and won 2 Emmy Awards as the Executive Producer of the films “Esperanza” and “Mi Casa Hogar”.

As the founder and co-moderator of the Unfair Advantage Automotive Mastermind Group, he helps facilitate and stimulate the thought process of some of the auto industry’s brightest minds 3 times a year in Charlotte, NC.

As founder of WrestleCade Entertainment, he produces and promotes one of the largest sports entertainment events held annually on the East Coast which has raised thousands for charity and broken attendance records.

For more information about Tracy, visit his website at TracyMyers.com The book, titled “In It To Win It”, will be a collaborative effort of Tracy Myers, Tom Hopkins and other Entrepreneurs and Professionals all around the world revealing their top secrets on an array of subjects ranging from health, wealth, marketing and business success. The book is due to be released in 2012.

“I attended one of Tom Hopkins Boot Camps as a young automotive sales professional way back in 1994. I consider him one of my mentors and I’m extremely excited to team up with him for this book. He’s one of the world’s most noted and respected sales training experts and speakers and I can’t wait for everyone to get their hands on this book,” remarked Tracy Myers.

Tom Hopkins, “The Builder of Sales Champions,” carries the standard as a master sales trainer and is recognized as the world’s leading authority on selling techniques and salesmanship.

Tom Hopkins is the author of fourteen books, including “How to Master the Art of Selling™,” which has sold over 1.4 million copies worldwide. This mega-selling book is considered a must-have reference guide for top selling producers in every field of sales. He has also authored three selling-skills books in the popular “…for Dummies®” series.

Mr. Hopkins’ talent of teaching in a creative and entertaining style has brought him a tremendous following, as well as constant demand for appearances at regional and national conventions each year. In 1976, he founded Tom Hopkins International, Inc., and dedicated his life and his company to teaching and inspiring others through his seminars, books, audio and video training programs. Today, over 35,000 corporations and millions of professional salespeople through the world utilize his professional sales training materials daily.

To learn more about Tom Hopkins, please visit his website at http://www.tomhopkins.com

Myers, owner of Frank Myers Auto Maxx, is commonly referred to as The Nations Premier Automotive Solutions Provider. Best-Selling author and legendary speaker Brian Tracy called him “a visionary to be compared to a Walt Disney for a new generation.”

He is also a Certified Master Dealer and was the youngest ever recipient of the National Quality Dealer of the Year award by the NIADA, which is the highest obtainable honor in the used car industry. His car dealershiprship, Frank Myers Auto Maxx was recently recognized as the number one Small Businesses in NC by Business Leader Magazine, one of the Top 3 dealerships to work for in the country by The Dealer Business Journal and one of the Top 22 Independent Automotive Retailers in the United States by Auto Dealer Monthly Magazine.

He has shared his business acumen with viewers of FOX News, appeared on NBC, ABC and CBS affiliates across the country, been featured in USA Today and has appeared on stages from coast to coast to share his inspirational stories and strategies for success. His best-selling books help people become better consumers as well as inspire industry leaders to become “game changers.”

As the founder of his own marketing and branding academy, Tracy teaches ambitious business owners, professionals and entrepreneurs how to get noticed, gain instant credibility, make millions and dominate their competition.